Bringing Light Into The World

Generation Sinai is a platform for parents and children to connect and learn with one another in preparation for each Jewish holiday. In this module for Chanukah, learn about how the Chanukah candles represent bringing the light of Torah values into a world that sometimes seems dark and painful. 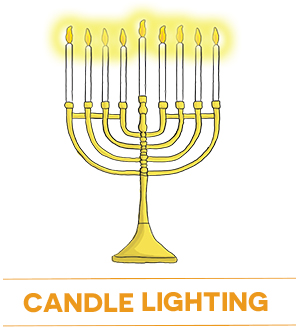 For the eight nights of Chanukah we light the chanukiah. We start by lighting one candle on the first night, two on the second, three on the third and so on – adding one extra candle each night. We do this to remember the great miracles Hashem did for us in the times of the second Beit Hamikdash (Temple). To get the full story, read about The Mighty Maccabees.

First light the shamash and then recite the following blessings. If you would like some help in saying the blessings, click the audio icon above the blessing. 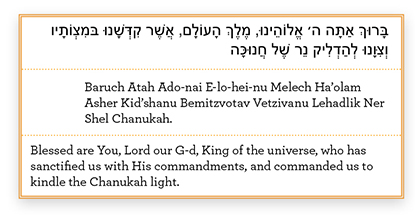 Say this blessing on the first night you light candles only:

Now light the day’s candles starting from the far left.

We now sing Ha’Nerot Halalu and Ma’oz Tzur together. Play the recordings and do your best to sing along! 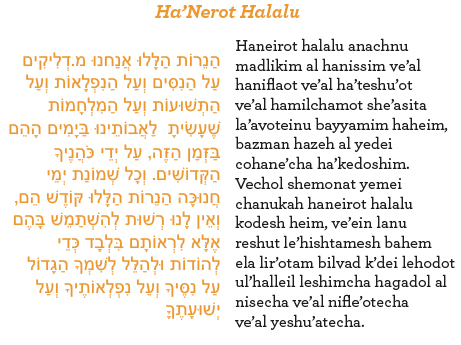 Now we sing together 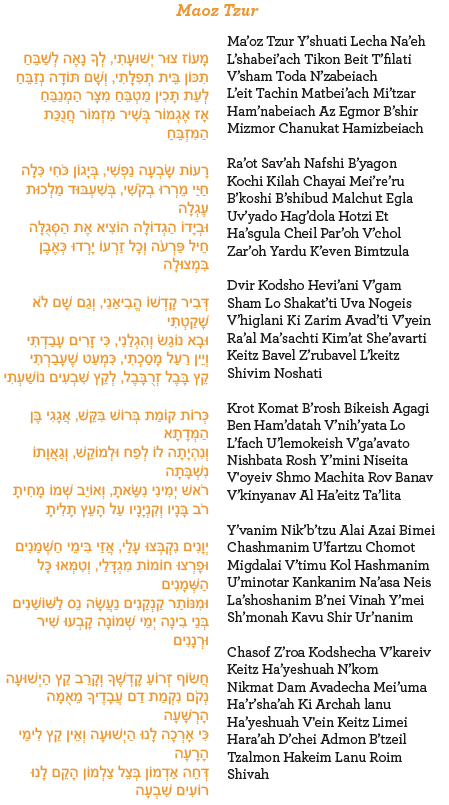 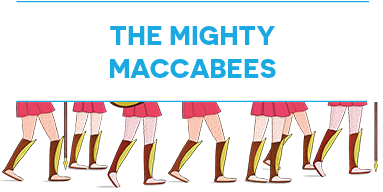 More than 2000 years ago, the land of Israel had been conquered by the Syrian-Greek Empire and ruled by the evil emperor Antiochus the IV. Antiochus made the Jews’ lives very difficult. He was an angry, oppressive ruler. He called himself  “Epiphanes”, meaning “the gods’ beloved”, but some secretly called him “Epimanes” meaning “madman”.

Antiochus hated people who were different. As Jews, we know that being different makes you unique and interesting, but Antiochus didn’t see things this way. He wanted everyone to look and act like him. Worst of all, he wanted them to worship his idols. He removed the Jewish People’s beloved, principled High Priest Onias III from the Temple in Jerusalem, and replaced him with his brother Jason, who was happy compromising his ideals, and being less of a Jew and more of a Greek. With the support of Antiochus, Jason was then overthrown by the even more assimilated Menelaus.

Antiochus then resolved to destroy the Jews. He marched on Jerusalem, massacring the people and plundering the holy temple. He issued a series of decrees forbidding Jews from going to shul and desecrating the sacred institution of marriage. He confiscated and burned their holy Torahs. He made it illegal to keep Shabbat or kosher or to perform a brit milah.

One day, Antiochus’ evil army arrived in the village of Modiin, where the brave kohen Mattityahu lived. Refusing to bow down to the idols of Antiochus, Mattityahu gathered his family and fled to the safety of the Judean hills. Soon, all the brave Jews who refused to give up their Judaism joined Mattityahu and his family. There they formed a small but fearless army of brave fighters. They resolved to destroy the altars for idol worship that were built by Antiochus and take back their land. Bravely leading the army was Mattityahu’s courageous son, Judah the Maccabee. Maccabee is an acronym for Mi Kamocha Ba’eilim Hashem, meaning “Who is like You, O G-d.”

Antiochus sent his great and mighty army of 40 000 men to wipe out Judah and his men. The Greeks were armed with the very best weapons. They even rode into battle on elephants, which were the “tanks” of their time. Hashem performed a tremendous miracle and the mighty Greek army was defeated by the small group of poorly armed, brave Jewish warriors. Victorious, Judah and the Maccabees made their way back to Jerusalem which was now – once again – in Jewish hands.

They entered the Temple and cleared it of all the idols which the Greeks had brought there. Next, they wanted to light the Menorah, the great gold candelabrum, and bring light back into the dark and damaged Temple.

In the debris, they found only a single small container of pure olive oil bearing the seal of the High Priest Yochanan. This was the only oil that was allowed to be used to light the holy Menorah. This jar of oil would only be enough to keep the Menorah lit for one day. They lit the Menorah anyway. Miraculously, the next day the Menorah was still burning. And the next day. And the day after that. By a miracle of G-d, it continued to burn for eight days, the time needed to prepare a new batch of oil.

The Rabbis of the Sanhedrin established Chanukah – also known as “the festival of lights” – as a remembrance of the miracles that were performed at this time. The festival is commemorated through lighting the chanukiah for eight nights in the Hebrew months of Kislev and Tevet.

Surely the miracle of a small band of poorly equipped Jews winning the war against the mighty Greek army was far greater than that of the oil lasting for eight days?

Q: Why is the symbol of Chanukah the Chanukiah? 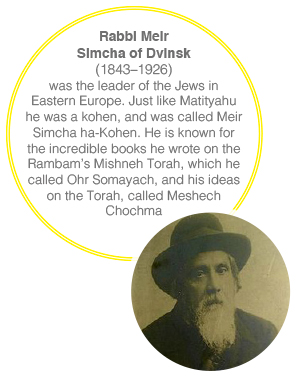 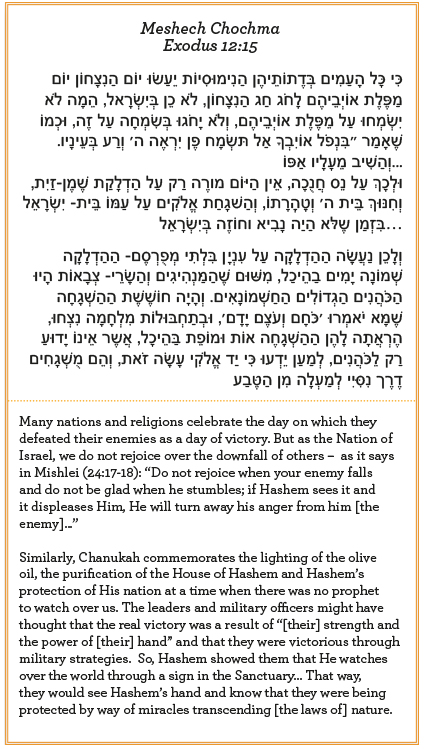 A: The Meshech Chochmah explains that as Jews, we never celebrate the downfall of other people, no matter what they did to us.

The Egyptians enslaved us for decades. They killed our sons and made us work day and night. Yet we did not rejoice in their suffering. When the Egyptian army drowned in the sea that Hashem had split for us, the angels wanted to sing praises to Hashem. Hashem asked the angels how they could sing praises while His creations, the Egyptians, drowned before them?

And so too, during the time of Chanukah, we don’t celebrate the defeat of others – even though they tried so hard to destroy us as a people. Instead, we celebrate the positive; in this case, the light we can bring to the world through our faith and belief in Hashem and His Torah. As Jews we cannot let the hatred of others define who we are. We strive to be defined by the goodness, meaning and positivity we can bring to the world through our Torah values.
At the same time, we cannot forget the pain and suffering of our history. Of course, there are many days to mourn and to feel that pain. But ultimately, we need to remember that our main task in life is to bring light into this world. Just like the flickering flames of the chanukiah.

Listen to this inspiring story from the Holocaust that illustrates how even in the darkest of times, Jews have managed to bring light into the world. 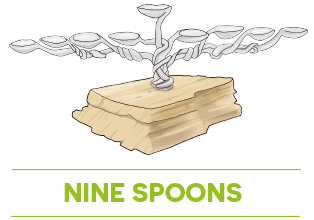 Q: How do you define yourself? How important is it that we define ourselves (rather than letting others define who we are)?

The letter below was written by the wives of the four men killed in the Har Nof terror attack this past November. In light of what we have just learned, discuss how these families have chosen to react to our enemies today. 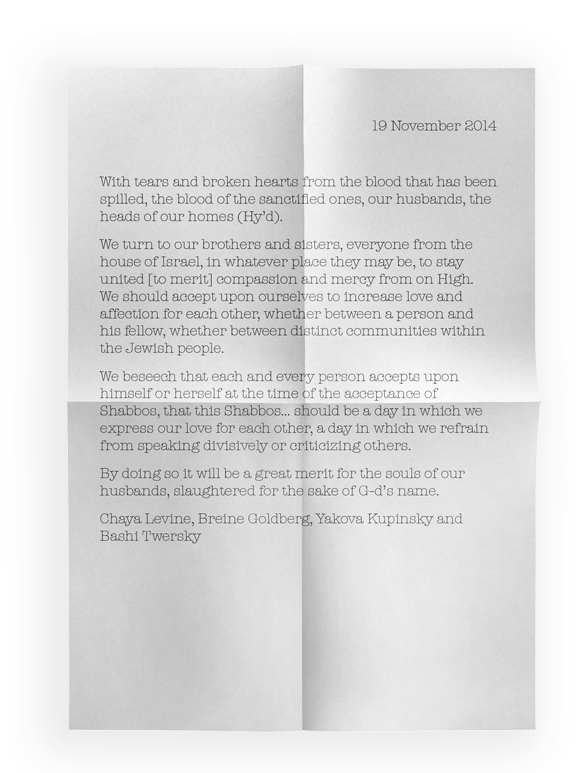